CatsCast publishes speculative cat stories monthly. We hope that each story leaves its cat-loving listeners a little happier after listening than they were before. See the sidebar for instructions on how to subscribe, or listen to (or read) individual episodes on Patreon.

April 2022: CatsCast Episode 1: The Cat Lady and the Petitioner by Jennifer Hudak.

You can find us on twitter at @catscastpod or on Mastodon at @catscast@wandering.shop. For general inquiries, email catscast@escapeartists.net.

Laura Pearlman’s short fiction has appeared in Nature, Shimmer, Flash Fiction Online, and a handful of other places. Her LOLcat captions have appeared in McSweeney’s. She’s a former associate editor at Escape Pod and has guest-edited episodes of Escape Pod and Cast of Wonders. She has a tragically neglected blog called Unlikely Explanations and can be found on twitter at @laurasbadideas.
Associate Editor: Kitty Sarkozy (she/her)

Kitty Sarkozy is a speculative fiction writer and actor. She is an Associate Editor of Pseudopod, an award-winning weekly horror podcast in the Escape Artists network. Several large cats allow her to live with them in Marietta GA, She enjoys tending the extensive gardens, where she hides the bodies. For a list of her publications, acting credits or to engage her services on your next project go to kittysarkozy.com.
Associate Editor: Tarver Nova (he/him)

Tarver Nova is a spec-fic writer and professional night owl. His stories are found or forthcoming in Kaleidotrope, Daily Science Fiction, and elsewhere. He is found in New York with an ever-growing number of forever and foster cats. Visit him at tarvernova.com or show him your cats on Twitter @tarvernova.
Audio Producer: Wilson Fowlie (he/him)

Wilson Fowlie lives in a suburb of Vancouver, Canada and has been reading aloud since the age of 4. His life has changed recently: he lost his wife to cancer, he has joined the Escape Artists team, and he changed day jobs, from programming to recording voiceovers for instructional videos, which he loves doing, but not as much as he loved Heather.
Audio Producer: Dave Robison

Dave Robison has lent his voice to dozens of stories for Escape Artists Inc. where he also supports the organization as Production Concierge. He’s currently shepherding several enterprises, including ARCHIVOS, a story mapping and presentation tool, a zombie-themed coffee company (complete with a weekly webcomic) called CORPSE COFFEE AND TEA, and his voice acting career.

Purrsephone (or Seffie, as she likes to be called) divides her time between the sunny living spaces of her home and the dark nether regions of her human’s bedroom closet. Her hobbies include purring and chasing the laser dot.
Editorial Intern: Frankie (she/her) 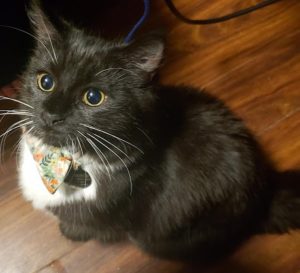 Frankie “Bartleby”, Esq. is a full-time snuggler and part-time dust mop from Queens. In her free time, she enjoys playing fetch with bottle caps and chirping at anything that moves (and some things that don’t).
Cover Model: Guinness (he/him)

GUINNESS IS AN AUTHOR, MODEL, ACTOR, AND CON-RUNNER. HE ENJOYS BOXES AND BLANKIES, AND HE LIVES WITH HIS HUMAN (AND PRINCIPAL PHOTOGRAPHER) KT BRYSKI. FOLLOW HIM ON TWITTER @GuinnessIsACat.

Thunder served as supervising editor at CatsCast from the beginning. He also worked in a research computing group in southern California, participating enthusiastically in conference calls. Always an overachiever, he held an additional job as a food critic. He was the best cat ever.

Subscribe to the EA Premium Content Feed. This is the best option for supporters of the Escape Artists Patreon, and will always have at least as many episodes as the public feed.

You can find your private RSS URL for this feed on the Escape Artists Patreon.

Or subscribe to our public feed, which will include some (but not all) of our episodes.