In 2018, the Escape Artists podcasts came together to produce Artemis Rising 5. The event has been many things over the years. Beginning as a celebration of women’s speculative work in the vein of Lightspeed’s Destroy! series, the event gradually shifted focus to widen its scope.

For us behind the scenes, Artemis Rising took on another meaning — a holistic approach to issues of gender in publishing, where we offered marginalized members of our staff senior editorial roles where they could train, learn, and lead. We made a concerted effort to give folks the stage, at every step of the process, who might never have gotten the chance otherwise.

One of the most common errors in discussing, showcasing, and describing marginalized genders in a submissions call is grouping women and nonbinary folk together, as though one necessarily implies the other. Even that listing, setting women first, suggests a hierarchy of identity and importance. “Marginalized Genders” is too broad, and the tonal focus of Artemis Rising had been on the femme side of experience, which alienates some intersex folks, trans men, nonbinary men, agender folks, and many others. “Everyone but men” carries similarly loaded implications we’re not best-placed to arbitrate.

While our goals were sound, our execution was not. To our great benefit, the conversation is evolving. We are thankful for the labor of those who offered feedback or criticism and for being given the opportunity to learn from it. The problems we sought to address in 2014 are not the same as those that require attention today.

In consideration of this, we return to the question all event organizers must consider: who does this serve? And how can we make it work in practice, rather than in name?

For 2019-2020, Escape Artists is considering these questions at each level of the process. It has informed the way we’re reading stories, the way we recruit readers, and the way we train our staff both for the everyday tasks and in preparation for their own career advancement. We’ve said for the last two years or so that Artemis Rising is going to change.

In order to make the right changes, and to make sure that our execution aligns with our intentions, we’ll be taking 2020 off.

In the meantime, we want to take this opportunity to highlight some other venues focusing on similar work. Here’s a list of some of the markets (including semiprozines, token payment venues, and non-paying publications) that would all benefit from wider recognition and funding support:

To our authors, narrators, and guest editors, thank you for pulling together across genres to make Artemis Rising the best it could be. To listeners and the broader community, thank you for including us in the conversation.

Artemis Rising will return, at the right time, in the right way, with more tales to share. See you then.

Welcome to Artemis Rising 5, our annual event featuring authors of marginalized genders and sexes. Episodes will air across the entire Escape Artists podcast network throughout the month of March. END_OF_DOCUMENT_TOKEN_TO_BE_REPLACED

It has come to our attention, through multiple channels, that the current incarnation of Artemis Rising 5 has caused harm to members of our community.

Thanks to Bogi Takács’s eloquent explanation of how to bring more voices to the table, we are examining the best way to repair the trust we’ve broken. We appreciate the conversations happening on various platforms and thank you for allowing us to participate in them.

Artemis Rising’s aims have always been to highlight the work of underrepresented genre authors and provide training and progression opportunities to junior members of the Escape Artist family who are members of traditionally marginalized groups. The underrepresented groups that we’ve chosen to focus on have changed over time and are likely to continue to change from year to year.

This year, we failed to consider the effect this change would have on people who were previously eligible to submit but were not eligible this year.

Artemis Rising’s submission portals will remain open and stories are being read while we consider how best to move forward, but we feel it is imperative to urgently acknowledge our mistake.

We apologize for the exclusion and hurt caused by this year’s call. We appreciate the feedback we’ve received; to everyone who voiced their objections, thank you for giving us a chance to correct our error. We hear you. 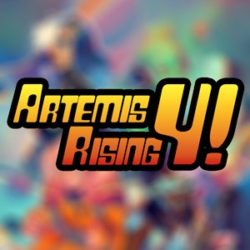 This year’s fantastic cover is by Geneva Benton, whose work you’ve probably seen on Fiyah’s incredible 2017 covers. Check out their interview with her. Layout by PodCastle’s own Matt Dovey.

Geneva is a self-taught illustrator from North Carolina, who loves working with colors, big hair, and drawing whimsy with a touch of realism and happiness. Her work has appeared in magazines, novels, editorial and advertising campaigns. You can find her most often on Instagram.

Need some swag? Geneva has you covered: