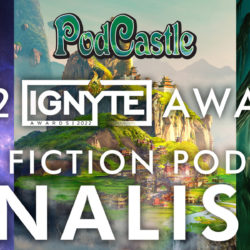 The 2022 Ignyte Awards finalists have been announced, and EA is honored to have returned to the Best Fiction Podcast list with three finalists — PodCastle, Escape Pod, and PseudoPod!

This marks PodCastle’s third and Escape Pod’s second years in a row as Ignyte finalists.

Congratulations also to Shingai Njeri Kagunda for her Best Novella nomination for And This is How to Stay Alive, along with EA alums Cherae Clark, Darcie Little Badger, Zin E. Rocklyn, and Troy L. Wiggins for their nominations!

Congratulations to all of the brilliant finalists!

The 2022 #IgnyteAwards are open for public voting from now through June 10th, and will be presented on September 17th.

*2021 Escape Pod guest editor Brent C. Lambert is a member of the administration team for the Ignyte Award. To avoid any conflict and with his agreement, he has not been listed for this nomination. However the Escape Pod team absolutely feel his work contributed to Escape Pod’s 2021 success (such as its Hugo nomination that includes his name), and thank him for his grace and humility. 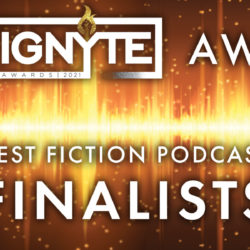 The 2021 Ignyte Awards finalist have been announced, and EA is honored to have returned to the the Best Fiction Podcast list with both PodCastle and Escape Pod!

This marks the second year in a row PodCastle has been a finalist.

The 2021 #IgnyteAwards are open for public voting from now through May 21st, and will be presented on September 18th as part of #FIYAHCON2021.

The finalists for the inaugural Ignyte Awards have been announced, and PodCastle has been nominated for this prestigious accolade! Co-editors Cherae Clark and Jen R. Albert, former co-editor and special editions editor Khaalidah Muhammad-Ali, host & assistant editor Setsu Uzumé, and audio producer Peter Adrian Behravesh are finalists in the Best Fiction Podcast category for their work on the podcast.

The Ignyte Awards both broaden and deepen the genre awards scene, including not only short story, novel, and art categories, but also awards for poetry, middle-grade, podcasts, and others — as well as two separate awards that celebrate contributions to genre in the pursuit of inclusiveness and equity. The Ignyte Awards reflect the business models, values, and imagination of the SFFH field, lighting a path of possibility for both new and veteran creators.

We’re excited to be nominated alongside such an amazing group of diverse creators. FIYAH has created a truly wonderful thing in such a short time frame — and they’ve managed to capture perfectly the variety of perspectives that the genre community has to offer. We are so honored.

We would like to extend our deep gratitude to PodCastle’s wonderful listeners, to the Escape Artists group of podcasts, and to the entire PodCastle team, past and present, who work tirelessly to bring you the best of fantasy fiction every week.

Nominations were sourced from the Ignyte Awards Committee: 15 BIPOC voters on FIYAHCON staff of varying genders, sexualities, cultures, disabilities, and locations throughout the world. Voting is open to the wider SFF community until September 11, 2020. Visit the convention’s website to vote now!